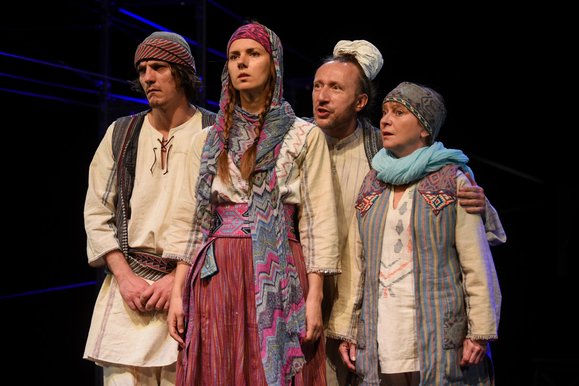 Every corner of the world has its share of wisdom which has been collected for centuries. This performance is an invitation to a theatrical voyage to the Near East and an encounter with the universal values of Arab culture, as drawn from Sufism, an eastern school of spiritual development.

How to be attentive and to see the things which escape most people? How to help the needy in a meaningful way? And can truth be learnt from other people? The young characters from the story,Rabija, Karima and Mohamed, learn it directly from master Mansur in everyday situations. Humility, honesty and respect for your interlocutor are particularly important in these lessons.

The script was written by Marek Kochan, writer, linguist, specialist in rhetoric and eristics and creator of the Gdańsk Academy of Debate, on the basis of his book Master Mansur’s Turban: Sufist Stories for Speakers and Leaders.

Director Romuald Wicza-Pokojski has tried to make asceticism a virtue not a defect… Marek Kochan’s text takes the viewer to the exotic world of the colours and tastes of the East, promising simple secrets, almost like A Thousand and One Nights. The costumes, entrancing and rich in their cut and materials, and the exotic music (by Łukasz Matuszyk) are merely essential additions to following the teacher of Sufism.