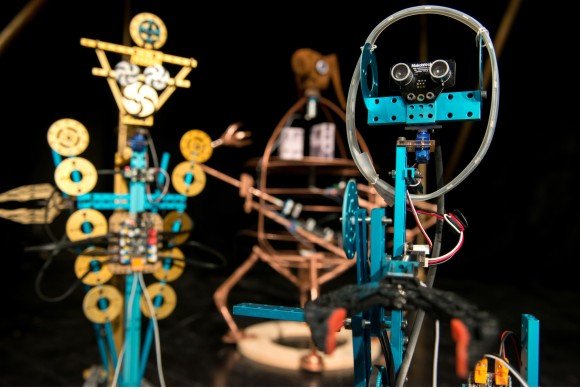 based on the book by Stanisław Lem

Two robot friends embark on a cosmic journey. On their way Trurl and Klapaucius meet strange machines and even stranger rulers of planets such as the Electronic Bard, a machine which makes everything which starts with the letter ‘n’ or a universally bored King Globares.

Fables for Robots are stories which robots tell each other. From these stories they learn about space and the phenomena which occur in it – stars, planets, black holes – but also about electroknights and palefaces. The fables tell us that the most important forces which rule the cosmos are feelings and the strongest of them is love. They show that science explains the world but only art can help you come to terms with it.

The production’s creators resort to traditional puppets as well as digital tools and mechatronics. The main heroes’ adventures are told with the help of robots, kinetic objects and machines. The actors use electro-animation and play a truly cosmic instrument such as the theremin, the only instrument which can be played without being touched.

Watching Fables for Robots in Gdańsk’s Miniatura we enter a world in which valiant electroknights fight for treasure, the young audience write avant-garde poems, candy floss flies about and a singing royal army marches upon the stage, in short total theatrical madness. It’s been a long time since I witnessed a play in which the audience so eagerly participated in the events and so animatedly commented on them. […]

A puppet, as we know, carries with it a certain metaphysics and secret of being, which means that the stories told take us into a different dimension. There’s nothing literal in this production but there is wit, poetry and wisdom.

The youngest audience were most drawn in by the moments of interaction and cooperation with the actors, most of which took place during the group poem-composing with the Electronic Bard. The animated and active reception of the show by the young audience is mainly connected with the show’s form, a multitude of various imagination-inspiring puppets and the activity of the actors (e.g. it was a very good idea to make words starting with the letter ’n’ with the help of a candy floss machine and childrens’ creativity).

Romuald Wicza-Pokojski has offered a Lem-inspired cosmos of animated robotics which he has endowed with a richness of form, narrowing down the interpretation to moral laws and truths. Wicza’s world has taken on a human quality, yearning for confrontation, surprise and uniqueness. Miniatura Theatre’s Fables for Robots is a display of set design and stage ideas, drawing in from the ancient source of never-ending fun.