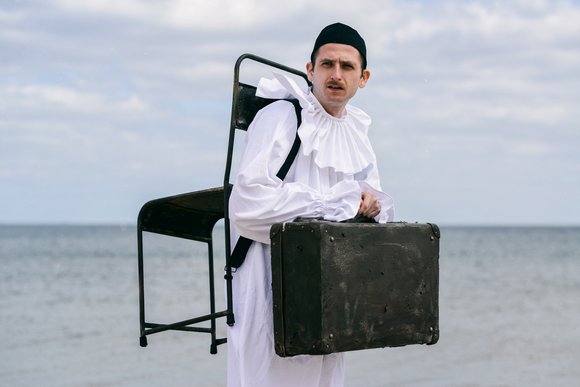 inspired by the stories of Jerzy Afanasjew

prapremiere: 1 May 2016, Theatre on the Beach in Sopot
running time: 1 hour without interval

The production can be seen at the Theatre on the Beach in Sopot, Al. Mamuszki 2.

The show is inspired by the life and work of the Sopot writer and director Jerzy Afanasjew. Afanasjew’s Chimeras is a story told by three Pierrots who, while attempting to escape the oppressive office reality, follow the tumult of the war and prepare shows to be performed at garrisons for the entertainment of troops. Bullets are flying over their heads and bombs exploding nearby when they pull out their portable theatre. Their tales are a mere stop on the never-ending trek through ruins, rubbish dumps and office blocks, everywhere where armed conflict may be encountered.

Jerzy Afanasjew was born in 1932 in Nowa Wilejka (present day Naujoji Vilnia) in the eastern part of Vilnius. He came from a multicultural family, was initially baptised in the Orthodox church and a few years later in the Catholic church. One year before the outbreak of war he and his mother left to stay with family in Łomża. From then on, they often lived on the brink of poverty. In 1940 they received news of his father’s death and his mother was diagnosed with cancer. She was brutally murdered by members of Vlasov’s army in a Warsaw hospital. At the time Afanasjew wandered around, staying with relatives in different parts of Poland. After the war he was a pupil of a lower secondary school in Płock and later of a technical secondary school in Białystok. In 1953 he started studying Civil Engineering at the Technical University of Gdańsk. He also started publishing in such popular magazines as Po Prostu and Polityka. May 1955 in Gdańsk saw the formation of Bim-Bom, a legendary student theatre, founded on the initiative of students of the Academy of Fine Arts Wowo Bielicki and Jacek Fedorowicz and the actors Zbyszek Cybulski and Bogumił Kobiela, commencing with the show entitled "Ahaa!". Afanasjew, as a Technical University student, was invited to join them. In 1963 he started studying Directing at the Polish National Film School in Łódź. He directed TV plays in many regional TV stations across Poland and in 1972 became Main Director at the Gdańsk section of Polish television, a post which he held for 10 years. He lost his job when in 1981, at the request of a delegation of shipyard workers, he directed the celebrations of the blessing of the monument to the Victims of December 1970. After the imposition of martial law, along with his wife Alina, a theatre and TV set designer, he handed in his communist party ID. He died in 1991.

Because all the actors in the show are puppeteers from the Miniatura City Theatre (the production’s co-producer), there has been no shortage of puppet animation in the best episode directed by Tomasz Kaczorowski, which is a miniature display of the director’s creativity and the actors’ dexterity. The main hero of the story, Franciszek, comes to life from a wire construction using shoes and a coat-hanger to which a large balloon has been attached. His wife looks very much the same, while the children are just a pair of shod ‘legs’ with a wire structure, dexterously animated by Wojciech Stachura.

The three Pierrots exist in the world of Afanasjew’s Chimeras on equal terms because each of them brings in a massive quality of astonishing themselves and others. Two stories are told by the ‘double bass’ Pierrot i.e. Edyta Janusz-Ehrlich who brings in a simple ordinariness which she juxtaposes with the extraordinariness of her stories. Jacek Gierczak has endowed his character with traces of an experienced harlequin, deeply affected by each impulse of the magical reality. Wojciech Stachura has equipped his Pierrot with a youthful strength and a persistent hope for a better today as well with a charming sensitivity. With great ease and delight the actors took the audience on a journey across the surreal world of this Sopot misfit’s imagination.