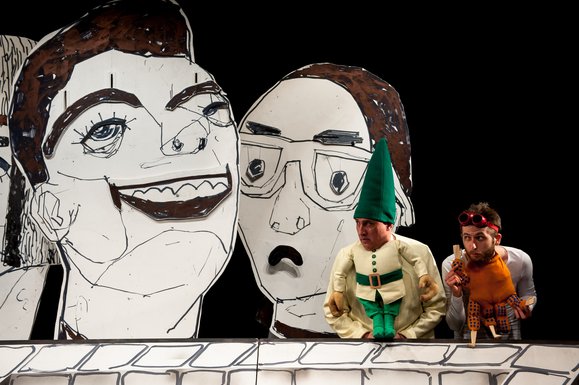 Things aren’t going right in Fairytale. The King is nowhere to be found and the Queen is making changes which the inhabitants do not like very much. When the forest roads are set to be covered in tarmac and the paths paved, the dwarves decide to do something about it.

“The Seven Dwarves” is a story about the deceptive nature of mirrors but mainly about the fact that it is worth fighting for what is important to us. And that this is best done with a group of friends.

Director Michał Derlatka and set designer Michał Dracz spin this alternative version of the Snow White story with exceptional theatrical imagination. The dwarves appear on stage in three forms: as actors, small puppets (when we watch the actors in long shot) and humanettes, animated figures with actors’ heads. There’s a perfectly good stage explanation for the changes in form and size, which brilliantly highlights the situational comedy of the play: when the small dwarves meet Snow White, this character is at times played by an over-sized high-heeled shoe or a giant face of a princess from which tears the size of footballs flow onto the stage.

What Agnieszka Kochanowska and director Michał Derlatka were most determined to show was how important cooperation within a group can be and that a mixed group which respects individuality and a diversity of personalities and talents has the greatest power. The play’s minimum recommended age is five, therefore it is especially praiseworthy that the authors have treated the young audience seriously, allowing them to experience such community-bonding emotions and showing them that even the daredevil dwarf, the “I-don’t-need-nobody”, did the right thing by coming round to working in a group.

The fast-flowing, very interesting show by Michał Derlatka is surprising in its multitude of ideas, both when it comes to the script and in the actual stage production. The very funny scenes such as the transgressions of the devil and the sheep or the ‘writing’ of a letter are interspersed with spooky fragments (practically all scenes with the demonic Mirror, Wioleta Karpowicz). The intelligent flow of the play allows us to experience it from a few different perspectives. The youngest children (the makers of the play recommend it even to five-year-olds) will see a cheerful, dynamic story of a group of friends who put up a brave fight to defend themselves and others. For older children “The Seven Dwarves” will be a story about how to accept diversity, about the fact that agreement is possible in all circumstances and, finally, that it is simply worth being yourself at all times. The accompanying adults will enjoy themselves equally well. The little contemporary ‘gems’ translated into the language of children’s theatre are accompanied by a great deal of irony. With the mass production of identical blonde beauties or the word ‘stylist’ so bandied about in the modern world (soon we’ll perhaps witness the emergence of a “theatrical space stylist”), the adult viewer will have great fun in trying to decipher the narrative between the lines.