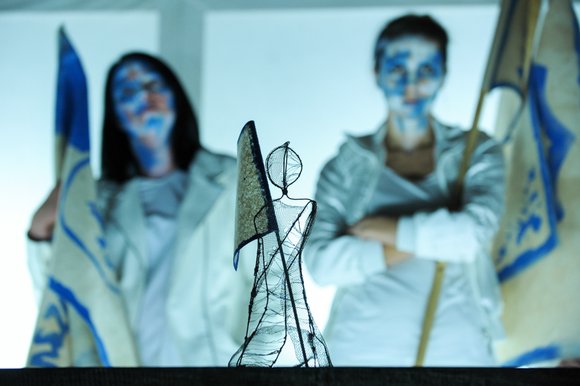 with a special apearance of Danuta Stenka

Production of the performance was financed as a part of the Contest for Stage Production of Old Works of Polish Literature "Living Classics" organised for the 250 anniversary of public theatre in Poland. The competition is held by the Ministry of Culture and National Heritage and Theatre Institute of Zbigniew Raszewski | www.klasykazywa.pl

The performance is a history of Remus, nomadic character who tries to save Kashubians, a community living on the coast of the Baltic Sea in the north of today’s Poland, falling into increasing oblivion. Here the real world mixes with the world of Kashubian legends and fairy tales. As a child Remus helps an imprisoned queen, as an adult he sets off on a journey of the region, peddling books and fighting Smętek, a Kashubian devil. It is a colourful work of fiction, analogous to ‘Don Quixote’, with the main character being accompanied on his travels around the Kashubia by a faithful companion, a musician called Trąba. The Miniatura show is a story of lost identity and of a forgotten place. In order to find it again, three apparitions must be conquered: Strach (Fear), Trud (Toil) and Niewarto (No Point).

Remus is, quite up-to-date and universally comprehensible throughout many different locations of the world, drama of a minority struggling for its salvation in a world which gave away authority to the majority, simultaneously causing it to become, despite all appearances of diversity, ever more homogeneous, standardized and stereotypical.

The performance won the special award in the Contest for Stage Production of Old Works of Polish Literature "Living Classics".

The skilfully written script extracts the essence of the story – the fate of Remus closely linked to the history of Kashubian places and people, intertwined with Smętek’s intrigues. [...] It might appear that the idea for Remus’s adventures to be recounted by actors sitting at a table may result in a static and boring show. It turns out, however, that the actors’ vivid performance, though sparing in expression, effectively holds the audience’s attention. [...]

The director, scriptwriter and actors have managed to extricate what is most important in Remus’s message and to show the depth of Remus’s story. In my opinion, we have lived to see a piece of work important for the history of Kashubian culture. The novel by Aleksander Majkowski, which by itself is grand literature without any inferiority complex, has finally been professionally staged. The production has been prepared with attention to detail and with care for the faithfulness and comprehensibility of the message, with the authors trying to go deep into the essence of Remus’s story while at the same time hinting at the topicality of Majkowski’s message. [...] Miniatura’s Remus shows the value of Kashubian tradition and literature as a universal value which reaches beyond our local and regional environs.

The production by Remigiusz Brzyk constructs an original idea for a show which stems out of the adaptation formula. Pokojski, responsible also for the dramaturgy, has offered the ‘story theatre’, constantly appealing to the audience’s imagination by the often repeated spell to close their eyes and open up to the ‘world-which-cannot-be-seen’. The eleven actors create this world mainly with the help of words, aided by music (performed live) and limited props. All of them are to an equal degree narrators, or rather spirits of this story, which enter the bodies of the characters for a moment to animate the skeleton-like puppets made of pieces of flexible wire. These puppets, or to be more precise, wire sculptures, symbolise the characters which are being talked about. There’s no traditional division into parts, there’s the collective subject who spins the shared story written out into many parts.

What is behind the idea is the communal ballad, spun in the evenings in cottages to keep up the community myth, with the help of impromptu objects from a handy props room, animated ad hoc. But there’s more to this at the same time, something which gives the production the structure of a ritual. From the first glance at this theatre what is striking is the monochromatic quality of the picture, as if composed in a painter-like fashion. The actors, seated motionless at a long table, dressed in white and with bluish-grey make-up-smeared faces, are to resemble, according to the script, “a faded photograph from the Last Supper from which the main character, Remus, has departed". What we see at the guest stage of the European Solidarity Centre (a place which fits the symbolism of the show perfectly well) is a feast of dziady (forefathers' eve) celebrated by spirits which come to us, the living, to “recollect the forefathers’ fate”.