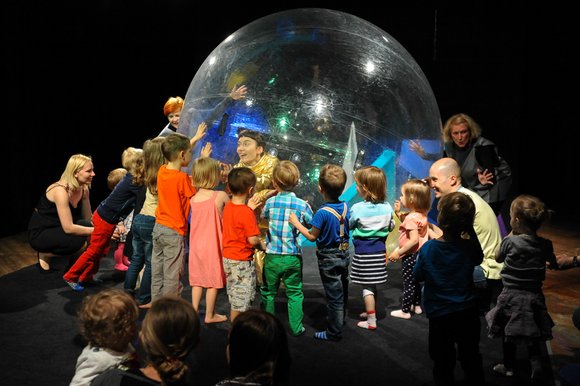 Performance for children aged 1 to 4

High above us, where the stars twinkle, lie great many mysteries. It’s possible that there is a limitless number of worlds completely different from our own. The starting point for the play Here and There is a story about a place where only straight lines exist and which is suddenly visited by a sphere from outer space. Come with us on a journey full of incredible images and sounds. See what happens when the Lines meet the Sphere. Join in the story about a great longing and a beautiful friendship between two worlds.

The performance is aimed at children aged between 12 months and 4 years. Children and their parents watch it sitting on soft cushions. It is theatre created with the youngest audience in mind, open to their reactions and inviting them to discover its secrets. It is theatre in which actors take on the roles of guides and the audience of discoverers. Here and there is an invitation to embark on a journey together into the world of lines and curves, and also into the world of theatre.

The performance is a reference to dance theatre and the entire choreography has been prepared by the Tri-City dancer Ula Zerek, who regularly collaborates with the Dada von Bzdülöw theatre, one of the most well-known and renowned Polish dance theatres founded by the choreographer and dancer Leszek Bzdyl.

With the aid of simple means and dressed in identical grey and black costumes the actresses Hanna Miśkiewicz and Joanna Tomasik create a new reality. Playing straight-line figures they move about calmly and rhythmically, gazing at the audience. The appearance of an inflated, transparent Sphere, put in motion by the muscle power of Ula Zerek dressed in a gold costume, caused the greatest stir in the young audience, who at first watched her with the greatest interest and later, when able to come closer, they sought contact with her. The play’s choreography by the dancer Ula Zerek blends well with the rhythm of the peaceful and cheerful music by Patryk Zakrocki. The idea of stage movement relies on one body causing the other to move. The actresses bring solid figures to life and shape their bodies to resemble particular figures, which in the closed world of figures sparks off the child’s imagination.

The small members of the audience were freely able to explore the performance area. During the play they repeatedly crossed the designated boundaries of their cushions, they had the time to move their cushions to another place, step on them and then watch the actors’ actions from a better perspective. At the very end the artists join in the children’s fun with great involvement.

The choreography and stage movement prepared by the creator of the idea for the play – the Tri-City dancer Ula Zerek, looks very interesting. The dancer herself (in the role of the Sphere) makes a great impression on the children, first appearing inside a large air-filled sphere, and then coming out of it in an intriguing manner (best part of the performance). The music by Patryk Zakrocki (from the SzaZa duo), happy and cheerful, not dominating the events on the stage but also lively and filled with unusual sounds, makes for a positive addition to the performance.