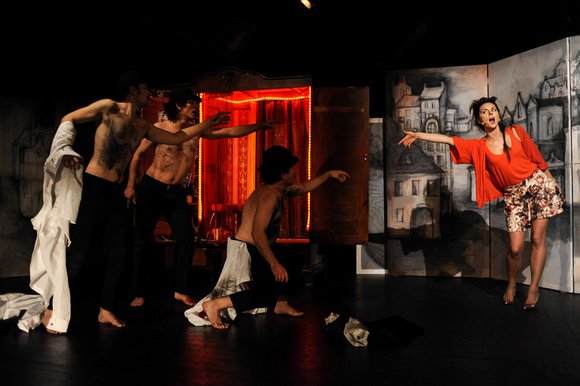 Inspired by Bruno Schulz’s “The Cinnamon Shops”, based on Leszek Pietrowiak’s volume of poetry “Świat według Schulza” (“The World According to Schulz”).

“Cockroachland. Songs After Schulz” is a music and art show inspired by the stories of Bruno Schulz from “The Cinnamon Shops”.

The artistic output of the writer who was friends with the greatest figures of Polish culture in the Interwar period, including Gombrowicz, Witkacy or Nałkowska, is one of the most original phenomena in Polish literature. It has frequently provided inspiration for artists from many artistic domains the world over, to mention a few - the famous film by Wojciech Has “Sanatorium pod Klepsydrą” (“The Hour-Glass Sanatorium”), the partially animated “Street of Crocodiles” by Stephen and Timothy Quay, dozens of theatre productions including the excellent play “The Street of Crocodiles” by the British theatre company Complicité, directed by Simon McBurney.

The Gdańsk production makes use of the poetry of Leszek Pietrowiak from his volume “The World According to Schulz”. The music, a fusion of rock, electronic and acoustic, was written by Marcin Kulwas, a Tri-City composer and guitarist. The singing is by Edyta Janusz-Ehrlich, an actress at the Miniatura Theatre, the originator of the production and, with Monika Konczakowska, creator of the set design. She is joined on stage by the actors Jakub Ehrlich, Piotr Srebrowski and Krystian Wieczyński, as well as Marcin Kulwas on guitar and Jarosław Stokowski on double bass.

The show takes the form of a recital with a substantially developed visual arts side, where the words of songs are a starting point for creating a picture. It draws on the tradition of live art theatre, where images are the main conveyors of meaning and emotion. A large part of the play is taken up by various kinds of dolls, elements of set design and unusual costumes inspired by Schulz’s series of graphics “Xięga bałwochwalcza”. The artists show a world ruled by masquerade and perpetual change which affects the characters as well as the objects. As Schulz wrote in his letter to Witkacy: “ Reality takes on various forms just for pretence, for a joke, for fun. Someone is a human, another a bug, but the shape does not concern the essence of things, it is  just a part assumed for a while, just a second skin which is going to be shed in a moment [...] The prevailing atmosphere is that of the wings, the back stage area where the actors, having taken off their costumes, are mocking the pathos of their parts”.

The most important building element of the world in Cockroachland is paper, a solid substance, yet easily prone to shape change and therefore ideally suited to Schulz’s view of the matter and its unlimited fertility. It must be said that paper is used throughout the performance in a very creative way: either covered in beautiful graphics imitating building facades, or acting as the Narrator’s dress, or constituting the material from which the grotesque faces of the residents of the Street of Crocodiles are made. Paper, as the main building material, is also accompanied by other substances:  eggs, paint, the painted bodies of the actors or, finally, the touching though disturbing doll of Father. All these materials, deformed and deconstructed, are perfectly suited to the play’s leitmotif: that everything is just a temporary shell, a costume which can be taken off easily, exchanged for another or simply destroyed.

[…] The story of the conjuring nature of the world has been told by the cast of the Miniatura Theatre in a rather unusual form. Cockroachland. Songs After Schulz is a recital of sorts, in which the world of Schulz is told not only through the medium of song but also image and motion. All the stories, about the Street of Crocodiles, Father and the Cinnamon Shops, are sung by Edyta Janusz-Ehrlich. The actress’ singing, full of suspense and emotion, with a beautiful timbre, would certainly not be as impressive had it not been for the accompanying live music, nostalgic and quite disturbing at times, written by composer and guitarist Marcin Kulwas. Together with Jarosław Stokowski who accompanied him on stage, he has succeeded in creating an exceptional atmosphere in Cockroachland through the use of guitar and double bass, supplemented by electronics.