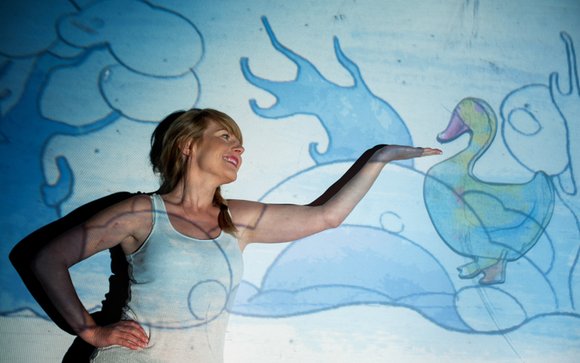 based on the story by Hans Christian Andersen

"When culture narrowly defines what constitutes success or desirable perfection in anything--looks, height, strength, form, acquisitive power, economics, manliness, womanliness, good children, good behavior, religious belief--then corresponding mandates to measure oneself against these criteria are introjected into the psyches of all members of that culture."

Clarissa Pincola Estes “Women Who Run With the Wolves: Myths and Stories of the Wild Woman Archetype.”

“It doesn't matter if you're born in a duck yard, so long as you are hatched from a swan's egg!”
H. Ch. Andersen

The issue of misfits is one of the oldest and most frequent motifs in myths, fairy tales and fables the world over. The subject of being different, not fitting in, searching for an identity and at the same time for somewhere to belong is a universal theme, recurring in an unlimited number of variations in literature, theatre or cinema. “The Ugly Duckling” by Hans Christian Andersen is one of the best known and most popular interpretations of this subject. The simple story of a duckling which turns out to be a swan contains a number of themes which refer to a deeper psychological and sociological content.

Hans Christian Andersen, from a poor family background, neglected by his parents and deprived of access to proper education, struggled with a feeling of maladjustment, an inferiority complex and various forms of rejection all his life. No wonder then that the character of an orphaned, abandoned or neglected child is such a frequent motif in his work, from fairy tales, through novels, to theatre plays.  But Andersen can also serve as an excellent example that, despite hard beginnings, you can find your place in the world and your spiritual family which will allow you to develop and realise your potential.

“The Ugly Duckling” in Miniatura is mainly supposed to remind us that different doesn’t mean ugly. In the era of globalisation, encounters with something different are unavoidable. The duckling’s otherness in our story provokes all kinds of reaction: spite and rejection but also indifference or fake charity which fobs you off, just to ease its own conscience. Not without reason has the phrase ‘ugly duckling’ penetrated our language and way of thinking. The meaning it evokes is as topical today as it was at the time when Andersen was fighting for others in the duck yard to accept that he’s a swan. It is therefore so important for children to remember this story and the significance it carries.

The experimental form of the play, drawing on Chinese shadow theatre, is meant to introduce children to the modern approach to theatre form. The visual and acoustic side of the play happens before the audience’s very eyes. The play employs overhead projectors, which can be found in every school, and which allow for the broadening of the classical form of the shadow theatre by using atypical elements such as water, grains, dyes or sand. When confronted with the technology used in the play, these common everyday ingredients take us by surprise and acquire a new aesthetic value. This also demands from the actors the creation and mastery of new animation techniques, as well as a great deal of concentration and precision due to the small scale of set design and props.

The story of a backyard misfit who sets off on a journey to find his place in the world is presented on a large screen hung in the centre of the stage. The duckling’s subsequent adventures are animated by actors seated on the stage, dressed in identical navy blue uniforms. The pictures they create, frame by frame, like in a real film, do not resemble modern children’s animation. They’re more like the Chinese “shadow theatre”. They unfold unhurriedly, employ symbolism and are astonishing in their ideas, with the duckling being covered in real grain by a spiteful turkey one minute or a night landscape suddenly appearing on the screen, drawn ‘live’ by the actor, the next.

[...] Had “The Ugly Duckling” only been a stage-animated film, it would have had little to do with a theatre production. However, as soon as we take our eyes off the screen, we are privy to a fascinating theatre world behind the scenes. We can see the actors simultaneously animating miniature figures, telling (and at times acting out) their adventures or imitating various noises – from the drone of a tractor to wind and storm.

Yet again Gdańsk’s Miniatura Theatre has amazed me with their courage. The courage to take on challenges, the courage to treat a young audience with respect and responsibility and the courage to fulfill their educational and culture-forming mission (it being, ultimately, the Miniatura CITY Theatre). There’s no compromise in this theatre and, what’s more, there is an idea. And this is not just a purely formal treatment. How could you tell a good story of otherness and acceptance if not by creating something exceptional, original and demanding. In the same way that true beauty is non-evident and non-superficial, so the Miniatura Theatre’s ‘The Ugly Duckling” is an apparently simple and unassuming production which takes children into a fascinating and truly deep dimension of the theatre reality and allows them to experience a range of theatre techniques and the living language of the theatre.