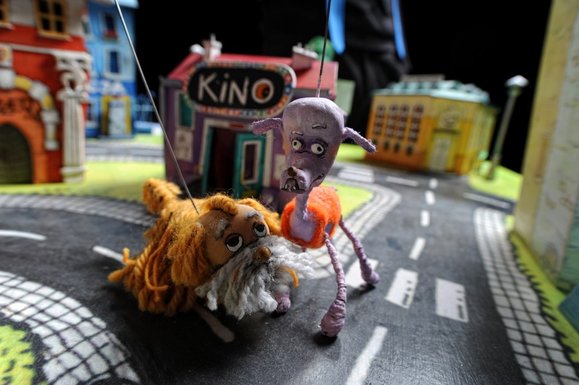 based on "The Cinema Mystery" by Martin Widmark and Helena Willis from series of books “Lasse and Maja's Detective Agency”  (published in the UK under the title “The JerryMaya Detective Agency”).

The town of Valleby is gripped by fear as someone is kidnapping local dogs for ransom. The famous actress, Iva Ross, who has come to the Rio cinema for the screening of her latest western The Whistling Cowboy in which she appears alongside her dog, Karl Filip, becomes the next victim. Dog owners are distraught and the police helpless. The criminal appears to be exceptionally cunning. The only clue is a ransom note. The chief of police is forced to ask Maja and Lasse for help. The young detectives have helped the police many times before but will they manage to solve the mystery this time? Will they find the place where the dogs are being kept? Will they be able to name the culprit?

In the next part of our theatre series, we do not only follow the events on a wonderful miniature model of Valleby, as designed by Dariusz Panas, but we are finally allowed to take a peek into one of the buildings - an elaborately constructed model of the Rio cinema's interior, specially devised for the play. More observant members of the audience will notice that this is no ordinary model. The cinema holds screenings of an animated movie by the director of the play Ireneusz Maciejewski and the set designer Dariusz Panas, and the walls  are covered in posters and photos which are regularly changed - just like in a real cinema.

In The Cinema Mystery we meet characters familiar from the previous part but also get to know other residents of Valleby. The makers of the play claim that some inhabitants of the town resemble famous movie stars. Is this really so? You'll have to see for yourselves.

The Cinema Mystery, like its predecessor, The Diamond Mystery, is a detective play full of mysteries and guesswork. As befits the genre, you can be sure of unexpected plot twists and plenty of dangerous chases. The audience also becomes involved in the police investigation.

The director of this theatre adaptation of the Swedish crime stories has opted for a tried and tested entertainment formula and prepared a performance which entertains adults and children alike. The children's humour is on a level which does not grate with adults and vice versa -  children aren't bored when the director "nods" to the adult audience.

The Cinema Mystery literally bubbles with ideas. (…) With an adult audience in mind,  Ireneusz Maciejewski has introduced a talk show journalist into the play, a parody of Kuba Wojewódzki, with fragments of the show in which this character appears clearly amusing the older part of the audience. The dolls to represent the staff of Valleby cinema proved to be an interesting idea as well, each of them resembling a film celebrity and not just on the strength of their looks. Zorban, who resembles Sylvester Stallone, is a thick-headed individual pretending to be administering boxer-like hooks. The Sweet Seller is Johnny Depp, the way we know him from his best roles -  as a weird recluse. There is also Woody Allen - a frustrated and out-of-place cinema projectionist.

After The Diamond Mystery the second of the series, based on the book “Lasse and Maja's Detective Agency” by Martin Widmark and Helena Willis, skilfully employs the latest technologies. The main plot, i.e the search for the kidnapper of the famous film star's dog,  is intertwined with hilarious scenes involving a TV crew reporting the events. Among others, the architects of the play have used a screen on which the elements of the story are played out, having been recorded with the camera which is present on the stage throughout the performance. The same camera also reports the flight of a miniature helicopter over the model of Valleby. The members of the TV crew have been given interesting,colourful and uniform costumes, which has created a certain bond between them, with the young viewer realising instantly that they form a  collaborative team, despite some inner animosities. It must be said that all the actors and actresses maintained a consistently good level of acting. The funny rough-and-tumble of two ambitious female presenters fighting for camera access ends on a positive note, which in itself is the one and only moral in a performance which otherwise tries to steer clear of moralising.